Be-Mobile is the world leader in so-called ‘smart mobility’, enabling governments, road authorities, car manufacturers and private companies to take the lead for travelers towards seamless travel. An innovative organization, where sustainability gains the upper hand in everything they do. The same goes for their HR policy: “When new talents start at BeMobile, we pursue a long-term approach,” Elke, HR Director at BeMobile, says. “But sometimes we have to be able to meet market demand very quickly, which can result in a resource problem.” At that point, TalentBay and FlowFactor came into the picture; TalentBay is able to meet this temporary demand and often encounters the perfect profiles at FlowFactor.

For the business unit ‘tolling’, BeMobile was looking for a DevOps engineer with a strong interest in Kubernetes; an orchestrator tool that is used for the code made by developers. Meanwhile, Glenn, DevOps Engineer at FlowFactor, was looking for a project in an innovative environment where he could develop his expertise in Kubernetes. Coincidence? We think not but one thing is for sure: it was a match made in heaven!

Nowadays Be-Mobile works with different teams, unlike in the past when only a single DevOps team was in charge of building software in the cloud. Due to organizational growth and the broadening of services it got too complex for the infrastructure team to understand the business logic and strengthen the backend accordingly. Therefore, Be-Mobile decided to set up separate teams in order to strengthen the development team for each business unit with DevOps roles.

Glenn indicates to be more than happy to fulfill this role: “I get the chance to grow my passion in a team of enthusiastic people with a lot of different expertise”. Elke adds: “We not only offer our consultants a project in which they can learn a lot about innovative technologies, but which is also of social relevance.” 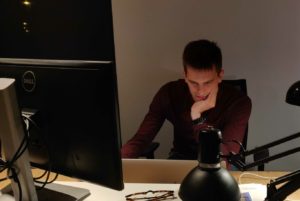 “My job is to make sure that everything around Kubernetes is steered in the right direction.”

Turning code into production: the challenge

The goal of Glenn’s project was to maintain a cloud-based platform with powerful algorithms. These algorithms were intended to map each truck driver’s journey with high accuracy, while seamlessly crossing all national borders for the ‘tolling’ business unit. The platform had to provide high-tech, remote toll calculations. This way, services gain more added value by using synergies with traffic information and management.

At the end of the development phase, the project was transferred to Glenn. “They needed a platform to automate the tolling implementations,” starts Glenn, “based on this information, I was able to find the best way to put the code into production and make sure it would operate on all servers.” To do so, Glenn used software such as Jenkins and Helm to integrate the code. Furthermore, this software was also used to support the development and testing of the platform. To ensure a stable environment and trouble-free updates, he used the container platform Kubernetes.

Because of previous projects at FlowFactor, Glenn was already used to Helm -the unofficial package manager of Kubernetes- even before being introduced to Be-Mobile. But it is not because of his acquired knowledge, Glenn would stick to one single possibility. After a thorough investigation of YAML and Kubernetes, it became clear that the optimization and automation of YAML and Kubernetes were being manifested. Other options he had in mind were Ksonnet, Kustomize and Kapitan. Since the technology lab of Be-Mobile had already implemented Helm, it turned out to be the most logical option.

Two of Helm’s most remarkable features that Glenn used were Charts – which defines a part of an application in one package – and release management. “A dozen environments need to be maintained and edited and should be seen as a full-time job with every other YAML. With Helm and Helmfile, I only need to change it only once. I can define a particular release that contains my change to implement it in all environments,” Glenn concludes.

How Be-Mobile has made Glenn’s dream come true

Glenn speaks with great enthusiasm about the project: “I already acquired some experience in Kubernetes through in-house projects at FlowFactor, but I was still eager to improve my skills.” By taking full responsibility for automating these codes in the business unit ‘tolling’, Glenn now lives up to his dream of becoming a true Kubernetes expert.