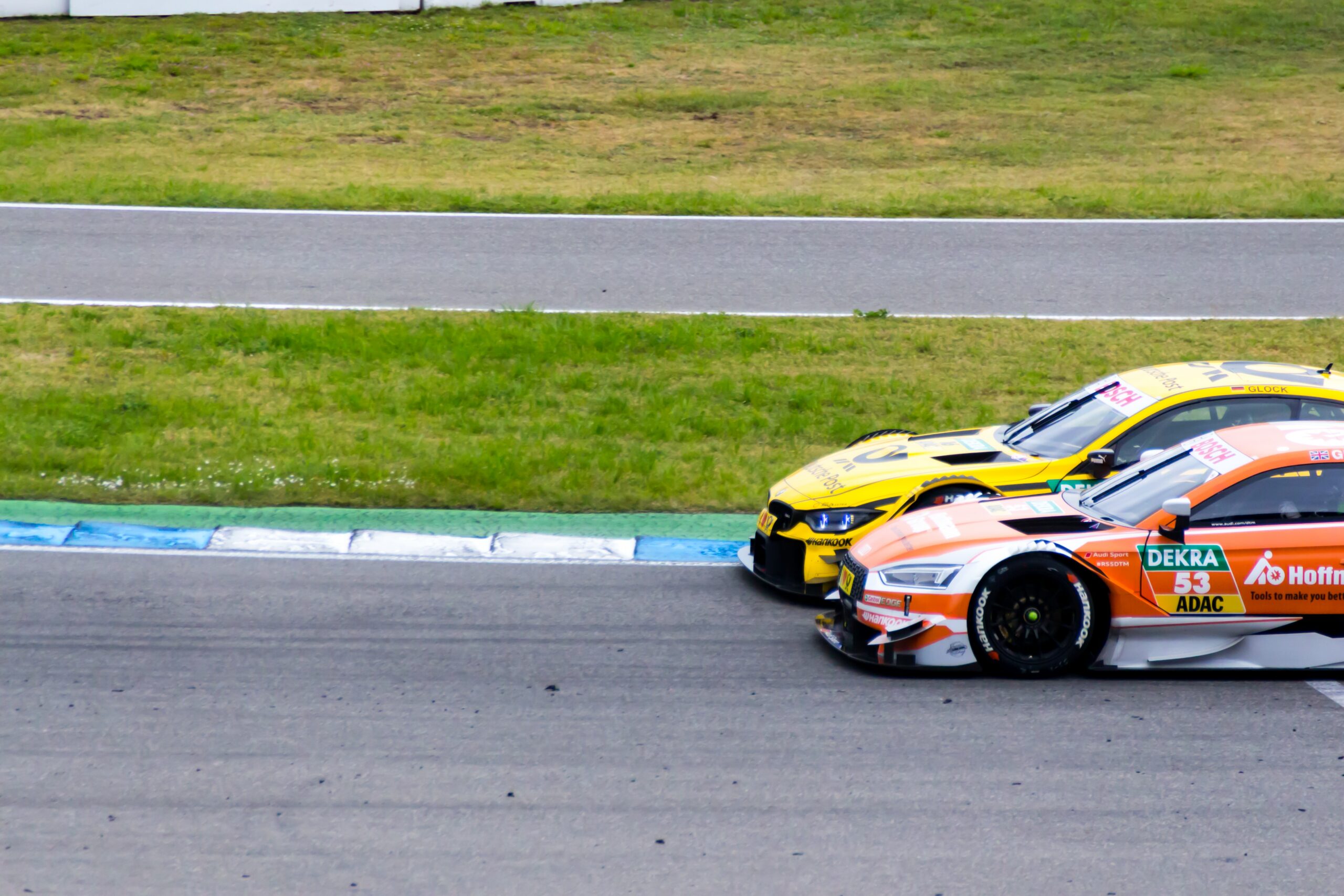 Logstash and Fluentd, both log aggregators, and largely interchangeable. But how do they compare when put under high load? How different are the resource requirements? Which one should you pick when you want to aggregate logs into an Elasticsearch cluster?

These are some questions that popped up while collaborating on a digital dashboard project at one of our clients at FlowFactor. At that time we didn’t perform any extensive comparisons. We kept all tools within the same family and set up a classic ELK stack with Logstash.

One thing that struck me was although there were plenty of articles comparing features, I could hardly find any data on the raw performance of both tools. Which led me to this brief experiment: a benchmark of both tools in an ELK and EFK stack.

I will focus on the behavior of both tools under high volumes.

Will they bend or break, and which one will cave first?

For this benchmark I’m mainly interested in how Logstash and Fluend react in comparable circumstances. I’ll be feeding both aggregators the same data and will ramp up volumes gradually.

The events are scraped from a Wildfly server log and enhanced with some details of the runtime environment. The server log will contain a variety of log messages and will yield events with an average size of 1.5 KiB. Ten dedicated worker nodes will generate these events.

I will rely on off-the-shelf tools to monitor and plot the results of my benchmark. All these tools are conveniently bundled on a single Controller node. 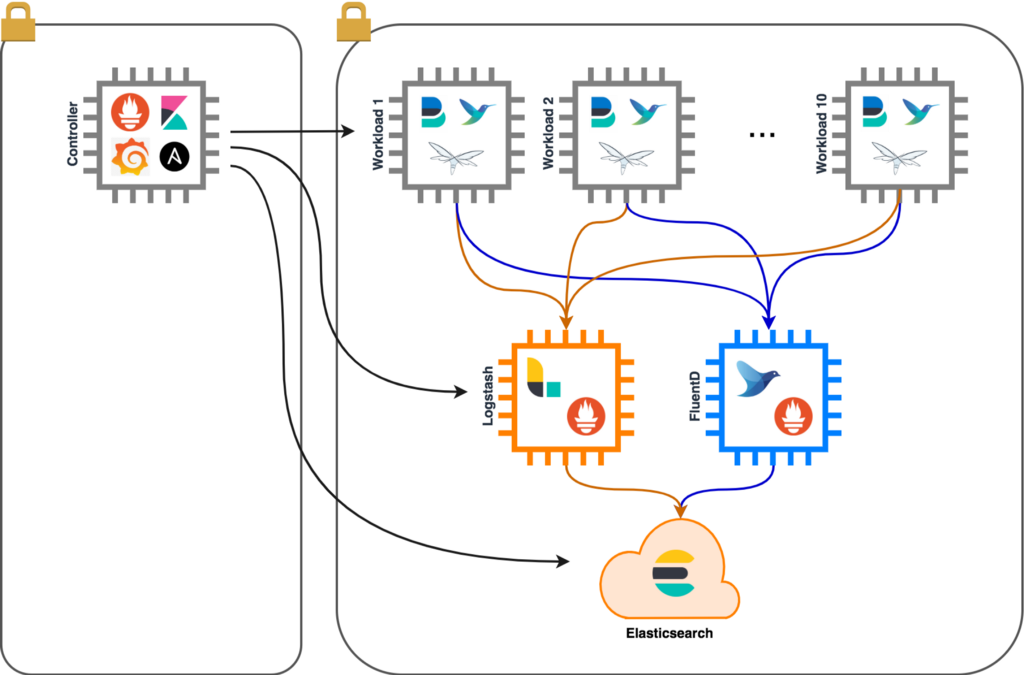 I collect metrics from all nodes but I’m mainly interested in the Logstash and Fluentd results. The other metrics are still useful to detect, for example, congestion on the workload nodes.

The workload nodes produce a steady flow of events for Logstash and Fluend to process. There are 10 nodes in total, providing ample volume, with the following specs:

Events are generated by scraping a Wildfly server log. The Wildfly server contains a single web-service and writes several events to the server log for each call received. One in 10 calls results in an IndexOutOfBounds exception and writes a multi-line stack trace to the log.

A simple python script provides the necessary input. It can spawn an arbitrary amount of threads that send SOAP requests to the web-service. Each thread will send 10 requests/sec.

The FileBeat agent will scrape the Wildfly server log and combine multi-line log lines into a single event. To give the events sent to Logstash more body, I also add the add_host_metadata processor.

The connection between FileBeat and Logstash is secured using Mutual TLS Authentication.

FluentBit proved to be more tricky. While it’s easy to configure FluentBit to scrape multi-line log entries, the events themselves were significantly smaller compared to the ones generated by FileBeat. Because of the nested nature of the extra fields that my Logstash configuration introduces, I will add a Lua filter to add a comparable set of fields.

The following configuration will now successfully scrape the server logs:

The connection between FluentBit and Fluentd is secured using Mutual TLS Authentication.

Logstash will not need a beast of a machine. After all, the better it performs, the more workload nodes I will need to bring it to its knees. I settled for:

I set up Logstash to use OpenJDK 11 and mostly default settings. I leave the heap at 1 GiB and also use the ConcurrentMarkAndSweep garbage collector. Full Garbage Collection cycles will start when the Old generation reaches 75% occupancy. A fixed heap is a superb way to hide the memory impact of the application from the exported metrics. For this reason, I will also load the jmx_exporter agent and collect the exported metrics in Prometheus.

The point of entry for FileBeat will be the beats input plugin. SSL is enabled and Mutual TLS Authentication is enforced.

The filter in the pipeline is simple. It will break each event, essentially a single entry in the Wildfly server log, into its relevant parts and parse the log’s timestamp.

Logstash will forward the resulting document to the Elasticsearch cluster. SSL is — of course — enabled.

During my initial tests, I noticed that Logstash could not use the full capacity of the node with the default number of pipeline workers: 2. I amped up the number of workers to 8 which proved to be the ideal number for my setup.

Logstash will not persist any data to storage but will rely solely on its off-heap persistent queues. This implies that Logstash will consume more than the 1 GiB of memory allocated to the heap.

Fluentd will run on a node with the exact same specs as Logstash. I applied the OS optimizations proposed in the Fluentd documentation, though it will probably be of little effect on my scenario.

Fluentd will run with 4 worker threads. This proved sufficient.

The FluentBit agent forwards events to the forward input plugin. The setup is similar to that of the beats input plugin for Logstash. SSL and Mutual TSL Authentication are enforced.

The filters in the pipeline are again similar to the Logstash setup. The filter splits each event into relevant fields. The timestamp will be extracted, but parsing it is the responsibility of the output plugin.

Fluentd forwards the documents created by the pipeline to Elasticsearch with the elasticsearch output plugin. The plugin also parses the timestamp and mimics some output behavior of Logstash (at least when configured as such).

Documents are collected in chunks and forwarded in batches to Elasticsearch. I set up Fluentd to group chunks by time (required when adding a date to the end of the Elasticsearch index name). Each chunk is 20 seconds in size. Chunks are flushed to Elasticsearch when it reaches its maximum size or after a delay of 10 seconds (when the system time exceeds the chunks’ timeframe).

Simply put, anything that passes through the pipeline “should” end up in Elasticsearch after at most 30 seconds.

Fluentd will not persist buffered documents to store and only use the node’s memory.

I will not elaborate on the Elasticsearch cluster itself. It serves a purpose but is not the subject of this exercise. The most important property of the cluster’s setup is the fact that it is oversized for its purpose. 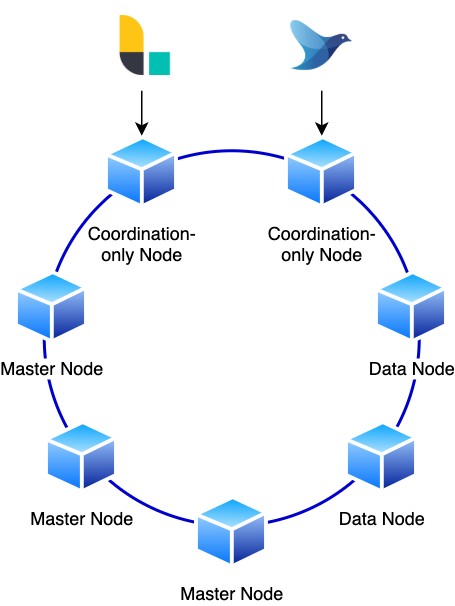 With the testbed and all tools set up, it’s time to throw some actual load at it. All 10 workload nodes will generate load at the same time. The number of threads are ramped up every three minutes, with increasingly large steps.

At lower volumes, both Logstash and Fluentd are showing a comparable load on the system. This behavior changes at the point 16 threads / workload nodes and it clearly shows that Logstash requires more CPU to process a comparable volume of events. On average, CPU load is 25% higher.

At 32 threads, Logstash reaches a maximum, while Fluentd still has some leeway. Fluentd reaches its maximum at 48 threads.

The evolution of nodes’ memory also shows some interesting facts:

Hard to say. Both Logstash and Fluentd are highly configurable applications. I am sure there are a lot of parameters that can be tweaked to yield different results. Who knows? Maybe I may just do that someday.Fluentd requires fewer resources but doesn’t look that good when it runs out of resources. If this test shows anything, then it’s that it’s probably a bad idea to rely on in-memory persistent queues without some kind of buffering mechanism in front of the log aggregator.In any case, if you want to know more about log aggregation or our DevOps services, don’t hesitate and get in touch with the experts at FlowFactor.